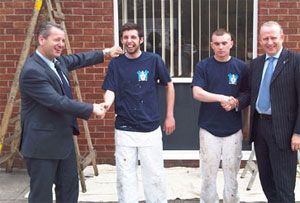 Provisional data shows that a total of 257,000 adult apprenticeships have been delivered between April 2010 and March 2011.

By the end of this Parliament, the Coalition Government is committed to supporting an additional 250,000 apprenticeships, compared to the previous Labour Government's plans.

“But there is no room for complacency. Apprenticeships are a vital tool for re-building the economy after the last government ran it into the ground.”

Graham Evans MP commented: “Creating 257,000 apprenticeships in the space of one year is an amazing achievement. That is a huge number of young people who now have the chance learn new skills and get a great start to their working life.

“I am an unashamed supporter of apprenticeships and such rapid progress makes me incredibly proud to support this Coalition Government as well.”