At the cutting edge of technology, VisionRacer UK is the latest business to move into premises at Runcorns Enterprise Business and Logistics Centre on Picow Farm Road. 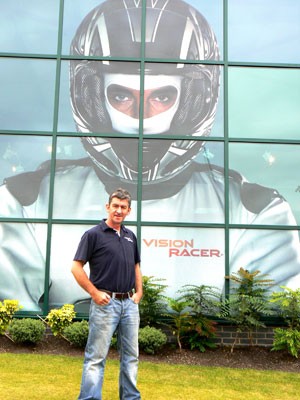 The 2000 square feet showroom and office space at the EBL Centre is dedicated to the development and marketing of futuristic electronic games equipment specifically, totally realistic racing car simulator rigs which are now sought after throughout the world.

Geoff Turton, Design Director for VisionRacer UK, says: Even though the original racing car simulator was launched in the middle of the current recession, the interest in the equipment has been amazing. The rigs have appeared on television and on the internet, and have been featured in the editorial columns of several high-quality magazines. As a result, we have been receiving enquiries from all over the world last week alone we shipped orders out to nine different countries!

The latest version of the ever-evolving VisionRacer rig features an authentic racing car seat, pedals, steering wheel and gears. Immediately in front of the driver is a screen showing the track or race circuit being negotiated. Several motor racing teams already have this equipment to familiarise their drivers with the various worldwide circuits, says Geoff. What the driver sees on the screen in front of him whether its a race circuit or rally course is totally accurate and very realistic.

VisionRacer UK already has its equipment at Madame Tussauds wax museum in London where visitors can enjoy a Lewis Hamilton driving experience, and negotiations are underway with several major High Street retailers to stock the virtual racing cars in time for Christmas.

The machines are exciting and very addictive and are suitable for all ages and levels of virtual driving from absolute beginners to professional racing and rally drivers, adds Geoff Turton.

Eddie Basnett, Haltons official Business Enterprise Ambassador and Chief Executive of the EBL Group developers of the Picow Farm Road business centre says: The VisionRacer equipment is wonderful! Its certainly exciting to use and very well designed and made. The company really deserves to grow and prosper and I am sure that their new high-profile base at the EBL Centre will help them on their way to global success!