EBL builds an extension to its trophy cabinet!

EBL FC - sponsored by Halton-based property developers and builders, the EBL Group – has had to make extra room in its trophy cabinet after just one season in the Runcorn Sunday Premier League. 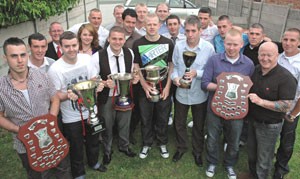 The team – which formed less than two years ago – were runners-up in this year’s Sunday league, and also reached the quarter finals of the prestigious Sunday Cheshire Cup, only to be beaten by eventual finalists Halton Sports.

Bob Wilson, team manager and director of the EBL Group, is delighted with his squad’s overall performance and successes. “All the hard work from the staff and players has certainly paid off this season and I would like to thank them all for their dedication – and to remind them that training starts again on July 22!”