The lads from EBL are on the ball!

Apart from the building and maintenance work they carry out on behalf of their company, many of the employees of the EBL Group have one particular passion in common - soccer! 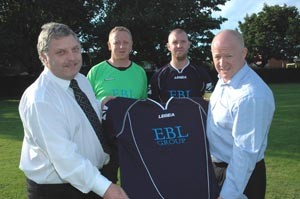 So serious are they about “the beautiful game” that they have got together to form a team - naturally call EBL FC - and have joined the Courier Post Runcorn Sunday League for the 2007/8 season.

With support and sponsorship from their own company and from suppliers - including the Widnes depot of Howdens Joinery Company, and local company Electrical Solutions - the EBL first eleven certainly look the part in their new co-ordinating strip.

Their first match was against South Liverpool FC who hosted a friendly at their Aigburth ground. “Perhaps this was baptism by fire,” says EBL director, Bob Wilson. “But the lads thoroughly enjoyed the experience and came away knowing exactly where their weaknesses are! They will now work on them and hopefully take the league by storm! Several members of the team are keen local footballers, including Rob Moore who helped establish EBL FC.”

Bob continues: “The team looks great in its EBL strip and one or two talents are starting to shine through. The lads are certainly very enthusiastic and it’s something that the company likes to encourage and support. We are also very pleased that several of our long-term suppliers have decided to support the lads - especially Howdens who have supplied the all-weather training kit, and Electrical Solutions who are sponsoring the team’s trophies.”