EBL has completed a £95,000 contract to install a specialist anti-skid surface to pathways and recreational areas in Victoria Park, the oldest park in Widnes. 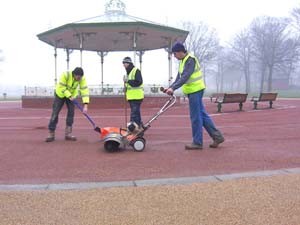 In total, the EBL team has resurfaced an area of around 6,500 square metres at the park for Halton Borough Council, Landscape Service Division. The EBL contract was part of a £2.5 million total restoration of the park - a scheme which attracted a grant of £1.7 million from the Heritage Lottery Fund.

The overall aim of the project was to restore Victoria Park to its former glory and return to it features which had been lost or suffered the ravages of time over many years. These include a lake, a bandstand, the Gladstone Memorial Fountain and other missing or crumbling elements. New facilities were also featured in the plan, including a park pavilion, a café and children’s playgrounds incorporating a water play area.

The surfacing carried out by EBL has been completed in two colours - red and a natural sandstone shade - as specified by Halton. The finished result is resistant to all weather conditions - including rain and frost - and has a life expectancy of at least 10 years.