It was a listed building restoration project that many builders would shy away from. The specialist skills needed, together with the balancing act between stringent controls and regulations laid down from English Heritage for a Grade 2 listed building and the equally as gruelling - and often conflicting - fire and safety regulations insisted upon by local authority building inspectors, could be viewed as a poisoned chalice by many.

But Bob Wilson, Construction Manager of the EBL Group and a director of the Halton-based company, saw it as a challenge.

On behalf of EBL, Bob quoted on the total restoration of a group of almost derelict barns - most of which dated back to the early 1700’s - which surrounded a potentially characterful cobbled courtyard in Sutton Weaver, Cheshire. 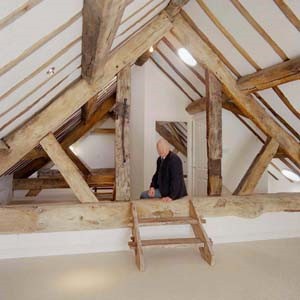 Although he had detailed architect’s plans to transform the barns into eight luxury houses straight out of the pages of Ideal Home magazine, Bob’s own vast experience with similar heritage listed building projects told him that many of the specifications were either not practical or would not be accepted by one or the other of English Heritage or the local authority. After detailed discussions with the architect and representatives of both English Heritage and Vale Royal council to agree mutually acceptable changes, Bob got his team of more than 30 builders together - some of whom had undergone specialist training for what lay in store - and started the laborious work of dismantling, brick by ancient brick, the total barn complex.

Original oak beams had to be salvaged, treated for infestation and re-used. Original bricks had to be individually and painstakingly cleaned for re-use and those beyond repair had to be matched and replaced by identical bricks sourced from reclamation sites throughout the North West of England.

The original centuries-old roofing slates were, in the main, beyond salvaging and had to be expertly matched up with identical slates - eventually sourced from the Far East. No two windows in the total development were of the same size. New softwood frames - identical to those which had almost rotted away during the past three centuries - were hand-made (naturally, uPVC or even hardwood were totally out of the question due to English Heritage regulations!). External doors - some measuring almost a metre in width, were also hand-made for each individual unit. And where stable doors had been bricked up over the centuries, Bob and his team had to rebuild the walls to replicate the exact brick patterns of the ancient d-i-y projects!

But at the same time as rebuilding the 18th century edifice as authentically and sympathetically as possible, Bob and his team also had to subtly and carefully incorporate 21st century technology - insulation, electrics, plumbing, etc - together with a luxurious standard of decor and fittings expected of properties on the market with a price tag of between £340,000 and £550,000.

For a little over 12 months, Bob dedicated most of his professional life to the project - now known as “Sutton Chancellor”. However, as a vital cog in the EBL wheel, he was also called away to oversee similar heritage projects for the company and had to juggle his time between Sutton Weaver, the renovation a Tudor building in Halton Village, and the total restoration of an ancestral hall near Chester.

However, at Sutton Weaver, from a complex of almost derelict barns - used latterly as a shelter for cattle with hay-lofts above - Bob has created a luxury enclave of eight homes, each boasting more than generous family accommodation with three to five magnificent bedrooms - many of them ensuite - private gardens with spectacular vistas over the Cheshire Plain, and two unobtrusive garages.

When making the final inspection of the complex on behalf of Vale Royal council, the local authority inspector was so impressed with the project that he is nominating Sutton Chancellor for the title of “Building of the Year” within the authority.

Says Bob: “Sutton Chancellor has probably been the most challenging project I have ever undertaken. There have been moments when I felt like ‘piggy in the middle’ of English Heritage and the local authority who were both throwing conflicting regulations at me based upon their own particular standpoints.

“However, diplomacy and common-sense prevailed and now all parties are extremely happy with the finished result - to the extent that the local authority is nominating the project for their prestigious Building of the Year award. And with all things considered - and against all odds - we completed the project on time and within the revised budget. All in all, a very satisfying result...”